Three Things You Have in Common With Cleopatra as a Titleholder 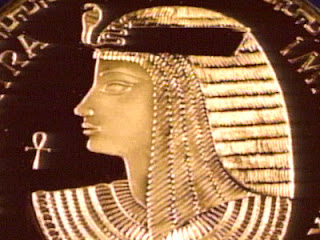 I was passing the magazine section at Walgreens over the weekend (picking up snacks with absolutely no nutritional value) when a cover grabbed my attention. Nope, it wasn’t Cosmo this time. It was this month’s cover of National Geographic donning a beautiful picture of Cleopatra.
Okay, I’m a complete nerd. No shame in my game. I just make it look good. Moving on. Anyone that knows me knows that I’m fascinated by queens in history and Cleopatra is very high on my list.
What I like about Cleopatra (the 7th… though no one really knows; all the women in her Ptolemaic bloodline were named Berenice or Cleopatra) is that the woman as a ruler was completely different than the woman portrayed in Hollywood. Thanks to a few Roman historians and poets, Shakespeare, and Elizabeth Taylor, she is known as the greatest lover of the ancient world. She is the seductress that made a great emperor cower to her wiles, and the siren that caused his young and powerful protégée to dump his toga (and wife) to have her. But she, like most women, was more than her pendulum of womanly allure.
She was a queen, a Macedonian Greek (about as genetically Egyptian as Elizabeth Taylor) that became the last pharaoh of ancient Egypt. This was quite an accomplishment for a woman so small she could fit inside a sack (it was a sack, not a rug). This was no small feat  for a woman with a beak shaped nose, and who lived in a dangerous world ruled by men.
I would imagine that she would laugh that her name has been equated with a seductress, because in many ways her passion was her politics. She put her love of Egypt before her love of anyone: her men, her children, and even herself. That’s the only way that I could imagine anyone remaining so firm and proud even when facing destruction (she wasn’t great friends with this guy Octavian). So then I asked myself, “What are some qualities that a titleholder has with women rulers of the past?” My sugar high (you thought I didn’t get my snacks?) allowed me to come up with three.
1)              She’s smart. She’s smart, probably smarter than you, and often (historically) smarter than she lets on. Cleopatra was a linguist: she spoke seven languages and was as well educated as the male dignitaries of her time. But aside from having a high aptitude for intelligence, she (like most queens in history) was very clever. She was not the most beautiful woman in the world, but she recognized beauty as more of a tool than a key, and made her best qualities work for her. She had a lovely speaking voice and was very articulate, and thus was known to captivate with words.
2)              She’s confident. –  A woman in power, even to this day, is a fascinating subject. The fascination roots in one question: “How did you do it?” The answer is usually less supernatural as it is unwavering: she was confident (extremely confident) in herself and her potential. When Cleopatra came to power, it was very much after her older siblings (including her two older sisters) attempted to take the throne and failed (paying with their lives). Cleopatra was supposed to marry her much younger brother and rule as a co-regent. But she knew that she was the best ruler for Egypt despite her nay- sayers. If you want it, make it happen.
3)             She’s ambitious. –  Women rulers want to be in charge. They are not the type to be happy with the expected: what’s expected of them, the way they are expected to behave, what lot they are expected to get in life. Instead, these women set expectations for themselves, preferring to live as authentically as they see fit. Cleopatra lived in a world that was being swallowed up by Rome, a world that didn’t include a woman’s opinion. She was expected to adopt these Roman cultural traditions; she was not supposed to be a pharaoh. But we all know what path she chose. If she had not, she probably would have ended up like her siblings… who no one remembers.